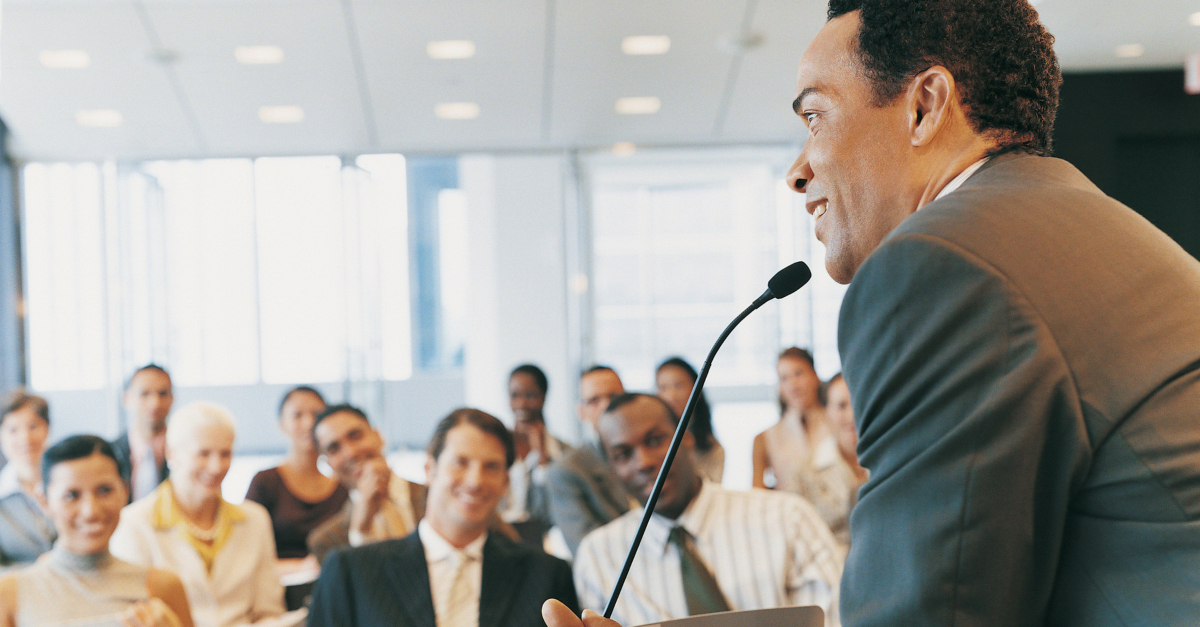 Watch this. This is how it’s done.

Robert Mueller was giving a commencement address at the College of William and Mary. He was a dignified former director of the FBI in the first Bush administration. He is anything but a comic or comedian. That day, speaking on “Fidelity, Bravery, and Integrity,” which he called the motto of the Bureau, he demonstrated a great way to use humor in a serious talk.

“In one of my first positions with the Department of Justice, more than 30 years ago, I found myself head of the Criminal Division in the U.S. Attorney’s Office in Boston. I soon realized that lawyers would come into my office for one of two reasons: either to ‘see and be seen’ on the one hand, or to obtain a decision on some aspect of their work, on the other hand. I quickly fell into the habit of asking one question whenever someone walked in the door, and that question was ‘What is the issue?’

“One evening I came home to my wife, who had had a long day teaching and then coping with our two young daughters. She began to describe her day to me. After just a few minutes, I interrupted, and rather peremptorily asked, ‘What is the issue?’

“The response, as I should have anticipated, was immediate. ‘I am your wife,’ she said. ‘I am not one of your attorneys. Do not ever ask me ‘What is the issue?’ You will sit there and you will listen until I am finished.’ And of course, I did just that.”

Mueller went on to say how he was learning—from his wife among others—how to be still and listen...truly listen...before making a judgment.

His was not a ‘funny’ story as such.

But it got a great laugh from the audience, and became a perfect illustration for the point I wish to make.

In his story, he did something foolish and his wife called his hand on it. He conceded that she was in the right and he in the wrong.

Every female in the audience identified with Mrs. Mueller and appreciated the speaker’s point. Every husband in the crowd identified with Mueller himself and felt an immediate connection with him.

Any story that connects the speaker to the audience for the rest of his talk is a great one.

Telling a story in which you yourself are caught red-handed in some offense and then properly humbled is a perfect device to connect you with your audience.

Let’s analyze it for a moment.

Suppose the story were reversed. Suppose Mueller had been the one telling his wife about his hectic day. And that Mrs. Mueller had stopped him in the middle of his monologue to demand that he get to the point. And, suppose he had responded sternly, the way she did him, and then he told the audience about that.

It would not have been funny and would not have gotten a laugh, like the first one. Secondly, it would have alienated the audience from the speaker by making himself look like some hotshot and putting his wife down.

What makes the story work is that Mueller was ‘somebody.’ That’s why, before telling what his wife had said, it was important to establish that he was running the Criminal Division for the U.S.Attorney’s Office in Boston. He was supervising a lot of lawyers. As government employees go, he was a ‘big shot.’

But his wife brought him back to reality that day.

As a result, the commencement audience bonded with him through that simple story. It’s a great device, if you have a good story and can make it fit.

I received a comeuppance of my own in the waiting room at the Toyota dealership. That day, it was crowded with customers and while waiting for my car to be serviced, I was trying to read my newspaper. At one point, unable to find the rest of my newspaper, I noticed the lady to my immediate left deeply engrossed in hers. “Is that my paper?” I wondered. “Did that woman take my newspaper?”  It seemed to be a definite possibility.

Now, there are 586 acceptable ways to politely inquire whether she had my paper. I considered none of them. “Ma’am,” I said, “Are you reading my paper?” She looked startled at first, then assured me she was not, that this was her newspaper. “You’re probably sitting on yours,” she said.

I was confident I’d already checked, but as I felt behind my back, sure enough, there was my newspaper wedged up against the chair.

Ten minutes later, as my car was called and I stood to leave, I turned to her. “Please forgive me. I’m so sorry.” She forced a smile and said, “Next time, use a softer voice.”

Later that day I posted this on Facebook, prefacing it with, “I made a fool of myself in the car dealership waiting room today.”

The comments flew in. Practically every one said things like, “I’ve done that,” “You’re human,” and “She’s probably a school teacher.”

Get that? Even though what I did was somewhat rude and thoughtless, by telling it myself and owning up to what I had done, the “team” rallied to my support. By the way, I will not be using that story in a sermon. It’s not humorous, but embarrassing. I only tell it here to make the point that friends rallied to my support when I told what I had done.

Humor is almost always acceptable in a sermon or public address.

Even funeral orations and eulogies can be improved with humor when chosen well and done right.

A well-placed humorous story is a treasure.

But the most effective use of humor will tell how the speaker/preacher goofed and was put in his place by his wife, a child, some elderly grandma in the store, or some other unlikely individual. People love hearing how the little person brought the high and the mighty down to earth.

Finally, a couple of notes of explanation.

By “humor,” we do not necessarily mean something hilarious or side-splitting.

Humor is a broad category and includes the type of stories we’ve told here. In a sermon or commencement address, gentle humor works far better than hilarity.

The hilarious lay-them-in-the-aisles story can be worst thing possible to a speech or sermon for the simple reason no one hears a thing you say afterwards. They love the story but you lost them there.

After telling the story of your comedown (or comeuppance?), it’s important not dwell on it. This is not about you, but about the point you were trying to get across.

I’m thinking of a preacher who told such a story, then proceeded to destroy its effect by bursting out, “Oh God! I’m making myself look so bad!” I was in the audience, and will not soon forget the lesson that preacher demonstrated that day: Tell your story, then get on with the message. No groveling allowed.

This content first appeared on Crosswalk.com and is used here with permission. To view the original visit: https://www.crosswalk.com/blogs/joe-mckeever/how-to-use-humor-effectively-in-your-sermons.html

Created for Greatness - iBelieve Truth: A Devotional for Women - October 21